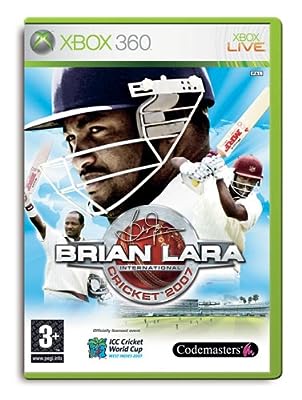 Price: £3.49
As of 2021-01-15 18:33:49 UTC (more info)
Product prices and availability are accurate as of 2021-01-15 18:33:49 UTC and are subject to change. Any price and availability information displayed on https://www.amazon.co.uk/ at the time of purchase will apply to the purchase of this product.
Availability: In Stock
Add to Cart
Buy Now from Amazon
In stock.
Product Information (more info)
CERTAIN CONTENT THAT APPEARS ON THIS SITE COMES FROM AMAZON SERVICES LLC. THIS CONTENT IS PROVIDED 'AS IS' AND IS SUBJECT TO CHANGE OR REMOVAL AT ANY TIME.

240 licensed international players with real players names and likenesses and 8 officially licensed World Cup stadia The ICC Champions Trophy 2006 game mode - 10 licensed international teams with official kits, 140 licensed international player names and likenesses Multi-player leagues, tournaments (including the ICC Cricket World Cup 2007 and ICC Champions Trophy 2006) exhibition and warm up matches Tutorial Mode - learn the basics of the game in a full cricket tutorial coaching mode - with commentary by Jonathon Agnew AI system - makes for a far more authentic and exciting cricket experience when playing against the CPU Batting - enhanced to include new shots, including the sweep shot, the reverse sweep and advancing down the pitch Bowling - ball delivery speed now based on the real life Wisden player stats, wind, climate and pitch condition have an effect on ball movement and bounce Fielding - new additions include throwing to both ends of the wicket, stumpings, slip catches and close-field catches Vastly enhanced graphics - new head and skeleton technology for the players and improved texturing, lighting and bump-mapping throughout Play with Officially Licensed cricket equipment from manufacturers such as MRF, Kookaburra, Gray Nicholls and many more Official Hawkeye ball-tracking analysis