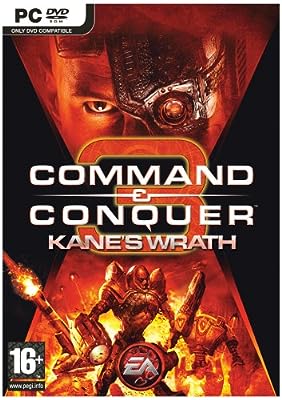 Price: £2.99
As of 2021-01-01 20:30:04 UTC (more info)
Product prices and availability are accurate as of 2021-01-01 20:30:04 UTC and are subject to change. Any price and availability information displayed on https://www.amazon.co.uk/ at the time of purchase will apply to the purchase of this product.
Availability: In Stock
Add to Cart
Buy Now from Amazon
In stock.
Product Information (more info)
CERTAIN CONTENT THAT APPEARS ON THIS SITE COMES FROM AMAZON SERVICES LLC. THIS CONTENT IS PROVIDED 'AS IS' AND IS SUBJECT TO CHANGE OR REMOVAL AT ANY TIME.

Unprecedented Multi-decade Campaign- Kane returns as the centerpiece of an epic new single-player campaign. Experience a new story that spans 20 years - from the rebirth of the Brotherhood of Nod after the Second Tiberium War through the dramatic events of the Third Tiberium War and beyond. Take Command of a Whole New Army- With the introduction of new units, structures, and abilities to each of the three factions, the Tiberium Wars will never be the same. Specialized Sub-factions- Play to your strengths with six unique sub-factions, each equipped with their own exclusive units, powers, and upgrades. Utilize the sub-faction of your choice to fully take advantage and compliment your play style. Devastate the battlefield with the immense firepower of all-new customizable Epic-units. Live-Action Videos - Witness the rise of the Brotherhood first hand through intense live action video sequences starring Joe Kucan, Natasha Hendstridge, and Carl Lumbly. Global Conquest Mode- - Fight the Third Tiberium are your way. Position your forces on a strategic level and then wage conflict in the fast, fluid, furious, tactical gameplay that Command & Conquer pioneered. Map out your strategies on the planetary level and wage all-out war on the ground.