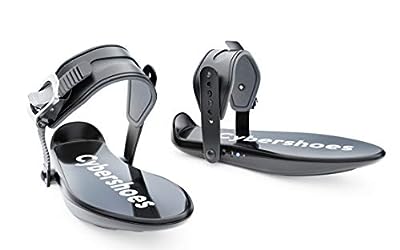 Price: £399.00 £348.55
As of 2020-12-24 18:19:29 UTC (more info)
Product prices and availability are accurate as of 2020-12-24 18:19:29 UTC and are subject to change. Any price and availability information displayed on https://www.amazon.co.uk/ at the time of purchase will apply to the purchase of this product.
You Save: £50.45 (13%)
Availability: In Stock
Add to Cart
Buy Now from Amazon
In stock.
Product Information (more info)
CERTAIN CONTENT THAT APPEARS ON THIS SITE COMES FROM AMAZON SERVICES LLC. THIS CONTENT IS PROVIDED 'AS IS' AND IS SUBJECT TO CHANGE OR REMOVAL AT ANY TIME.

Deeper Immersion you intuitively control your own movement in the virtual reality with your legs instead of fingers on the controller One size fits all Easy set-up and connection to the VR system strap on the cybershoes place on the Cyberchair start the game and get going Powered by the Steam gaming platform games that can be run via controllers can be played with Cybershoes Wireless connectivity to Windows PC and compatible with the VR headsets of HTC Vive HTC Wireless adapter HTC Vive Pro HTC Vive Pro Eyes HTC Vive Focus with Riftcat Valve Index Oculus Rift Oculus Rift S Oculus Quest with Virtual Desktop or Link cable Pimax all Windows Mixed Reality Headsets Samsung Odyssey+ Acer WMR Lenovo WMR Dell Visor Medion WMR Active Gaming Burn Calories by playing your favorite VR Games Track your physical activity using Cybershoes and determine the distance played in your VR games Unlock your Steam achievements as daily motivation Box contents 1 pair of Cybershoes (batteries included) 1 Cyberchair 1 Cybercarpet (round) receiver cable holder charger and gas lift Shoes for walking in Virtual Reality - Engineered in Austria, Made in Estonia