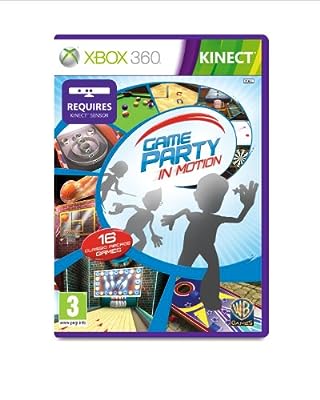 Price: £23.99
As of 2020-12-24 17:57:48 UTC (more info)
Product prices and availability are accurate as of 2020-12-24 17:57:48 UTC and are subject to change. Any price and availability information displayed on https://www.amazon.co.uk/ at the time of purchase will apply to the purchase of this product.
Availability: In Stock
Add to Cart
Buy Now from Amazon
In stock.
Product Information (more info)
CERTAIN CONTENT THAT APPEARS ON THIS SITE COMES FROM AMAZON SERVICES LLC. THIS CONTENT IS PROVIDED 'AS IS' AND IS SUBJECT TO CHANGE OR REMOVAL AT ANY TIME.

Play 16 family favorite games: Games include Darts, Hoop Shoot, Rootbeer Tapper, Table Hockey and more Fun, easy controls: Play games using natural arm and body motions, just like in real life using the motion sensing technology of Kinect for Xbox 360 Multiplayer action on all games: Get together with friends and family to see who brings their "A" Game to the Party with up to 16 players in tournament mode Online play: Game Party: In Motion will support local and online head-to-head play for 2 to 4 players 360 Avatar integration: Players can seamlessly use their 360 avatar as their in game character for Game Party: In Motion. Additionally, personal best scores, unlocked items and tickets won are stored with the associated Xbox Profile