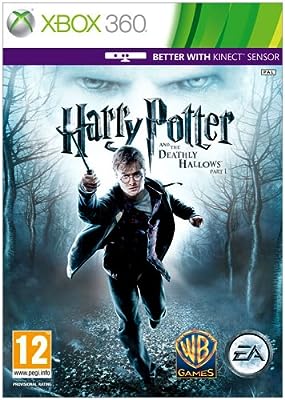 Price: £39.99 £8.31
As of 2021-01-08 12:25:48 UTC (more info)
Product prices and availability are accurate as of 2021-01-08 12:25:48 UTC and are subject to change. Any price and availability information displayed on https://www.amazon.co.uk/ at the time of purchase will apply to the purchase of this product.
You Save: £31.68 (79%)
Availability: In Stock
Add to Cart
Buy Now from Amazon
Usually dispatched within 4 to 5 days.
Product Information (more info)
CERTAIN CONTENT THAT APPEARS ON THIS SITE COMES FROM AMAZON SERVICES LLC. THIS CONTENT IS PROVIDED 'AS IS' AND IS SUBJECT TO CHANGE OR REMOVAL AT ANY TIME.

The wand is the ultimate weapon: Hold nothing back! Unleash an arsenal of formidable magic to defeat attackers, protect yourself from harm and evade capture. Deadly enemies lurk around every corner: Fight Voldemort’s minions, including Death Eaters, Snatchers and Dementors. Overcome a host of fierce creatures attacking on instinct alone. No other Harry Potter game has had this level of action! Become a master in stealth: Use the Invisibility Cloak, Polyjuice Potion and Peruvian Instant Darkness Powder to avoid detection and sneak past adversaries. Unique cover mechanics: Use magic to create and wield cover. Utilise the environment to make shields out of trees, tables and statues, and then throw them at enemies, turning defence into attack. Powerful potions: Find and trade goods for potions that can be used to attack, escape, restore health or increase your luck. Out of Hogwarts and on the run: Your dangerous journey takes you through a host of new environments, from city streets to remote wilderness areas, to new and iconic wizarding locations Each presents different enemies to fight, challenges to uncover and quests to complete. New game engine: A new game engine built specifically to leverage the technology of HD consoles ensures high definition graphics and visceral gameplay that will immerse you in the action like never before!