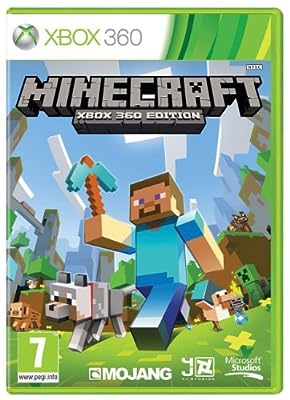 Price: £39.99 £22.00
As of 2021-01-08 01:36:36 UTC (more info)
Product prices and availability are accurate as of 2021-01-08 01:36:36 UTC and are subject to change. Any price and availability information displayed on https://www.amazon.co.uk/ at the time of purchase will apply to the purchase of this product.
You Save: £17.99 (45%)
Availability: In Stock
Add to Cart
Buy Now from Amazon
In stock.
Product Information (more info)
CERTAIN CONTENT THAT APPEARS ON THIS SITE COMES FROM AMAZON SERVICES LLC. THIS CONTENT IS PROVIDED 'AS IS' AND IS SUBJECT TO CHANGE OR REMOVAL AT ANY TIME.

Share the experience with 4 players split-screen on one console or up to 8 players over Xbox Live. Bigger worlds, faster draw time, and greater draw distance Native 1080p at 60 FPS The widest range of downloadable content on a console The infinite possibilities in Minecraft just got bigger! The gaming phenomenon comes to the console with new features designed specifically for Xbox 360 Crafting has never been faster and easier! The new crafting interface in Minecraft for Xbox 360 delivers a completely new way to build Minecraft worlds where your imagination is the only limit. Learn the basics and master essential skills faster with the all-new Tutorial mode. Play Minecraft: Xbox 360 Edition with Friends over Xbox LIVE. Combine local split screen* and Xbox LIVE play in any combination up to 8 players. (*Split screen option requires HD TV.) The widest range of downloadable content on a console