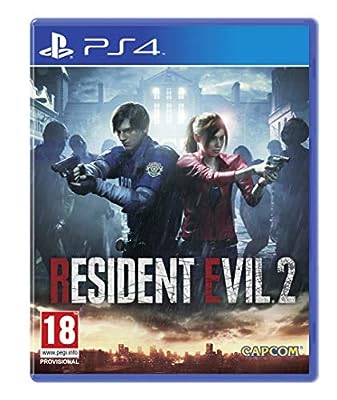 A spine-chilling reimagining of a horror classic - Based on the original PlayStation console release in 1998, the new game has been completely rebuilt from the ground up for a deeper narrative experience A whole new perspective - New over-the-shoulder camera mode and modernized control scheme creates a more modern take on the survival horror experience and offers players a trip down memory lane with the original gameplay modes from the 1998 release Terrifyingly realistic visuals - Built on Capcom's proprietary RE Engine, Resident Evil 2 delivers breathtakingly photorealistic visuals in 4K whilst stunning lighting creates an up-close, intense and atmospheric experience as players roam the corridors of the Raccoon City Police Department (RPD) Face the grotesque hordes - Zombies are brought to life with a horrifyingly realistic wet gore effect as they react in real time taking instant visible damage, making every bullet count Iconic series defining gameplay - Engage in frenzied combat with enemies, explore dark menacing corridors, solve puzzles to access areas and collect and use items discovered around the environment in a terrifying constant fight for survival See favorite characters in a whole new light - Join rookie police officer Leon S. Kennedy on his first day in the job and college student Claire Redfield, who is searching for her brother amidst a terrifying zombie epidemic Step into the rookie shoes of both heroes - Enjoy separately playable campaigns for both Leon and Claire, allowing players to see the story from both characters' perspective