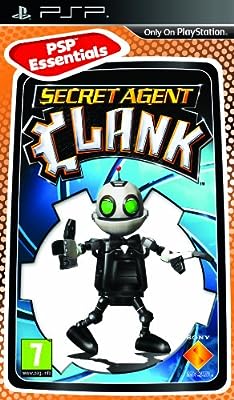 For the first time in the Ratchet & Clank series, Clank gets star billing as he breaks out of his usual supporting role and gets a full game of his own Unleash Clank's cutting edge array of weapons and gadgets, such as Cufflink Bombs, Tie-A-Rangs, Spy Sunglasses and the ever helpful Holo-Disguise Monocle Launch into a variety of gameplay styles from all-out action to cunning stealth and brain-busting puzzle solving Drive state-of-the-art super spy vehicles including speedboats, snowboards and sports cars Play as Clank, Ratchet and even Captain Qwark to gather enough evidence to set Ratchet free and discover who framed the innocent Lombax