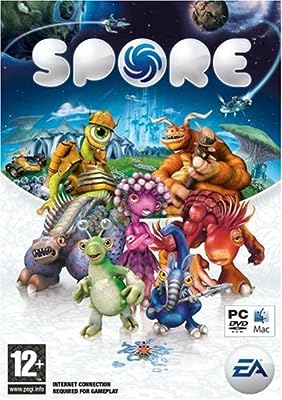 Take complete control of your creature's fate as you guide it through the following six evolutionary phases: Tidepool phase: Fight with other creatures and consume them to adjust the form and abilities of your creature. It's survival of the fittest at the most microscopic level Creature phase: Venture onto dry land and help your creature learn and evolve with forays away from your safe haven. Carnivore or Herbivore? Social or Independent? The choice is yours Tribal phase: Instead of controlling an individual creature, you are now caring for an entire tribe of your genetic craftwork. Give them tools and guide their interactions as you slowly upgrade their state of existence City phase: Bring your creatures' race into a new golden era by building up the technology, architecture, and infrastructure of their city Civilization phase: Once your city is established, your creatures begin seeking out and interacting with other cultures. You can have them do so with an olive branch or a war cry either way, the goal for your creatures is to unify the planet Space phase: The time has come to move on to other worlds in your solar system. Make first-contact, colonize, or terraform, then venture further to find other solar systems scattered throughout a magnificently rendered galaxy. A 'mission' structure provides new goals and paths to follow as you begin to spread through the universe A suite of flexible, intuitive creation tools leverages the creative imagination of the player. Creating an entire universe of creatures, plants, buildings, vehicles and planets has never been so easy or so fun. An infinite variety of design choices is just the beginning The world you explore is populated with creatures, plants, buildings and vehicles developed by other gamers and downloaded from a central database. The server chooses creatures and civilizations that best match your chosen environment, your experience level, and your creature's ability. In turn, your creatures are uploaded to the server to be shared with other gamers With procedural animation, your creatures and vehicles move based on how you construct them. They behave and interact based on your input and by their in-game encounters. That means there's no pre-determined path you must follow the game evolves based on your decisions Wonder what another gamer was thinking when they created and evolved a creature? Uncover information about each creature's origin in the Sporepedia, yet another way to explore the truly endless universe of creative expression that is SPORE.