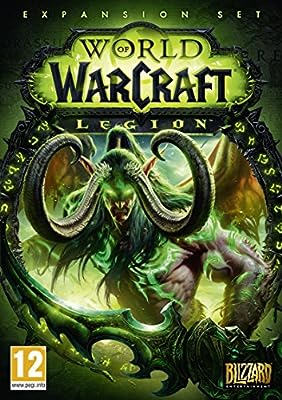 The World of Warcraft Legion expansion for PC is the sixth expansion for the ever popular Massively Multiplayer Online RPG The threat of the Burning Legion returns to Azeroth. In order to prevent the return of their leader the titan Sargeras, you must travel to the Broken Isles which lie in the Great Sea and are the heart of the Legions invasion Boost to Level 100: Prepare to face the invading armies of the Legion with a level-100-character boost, and experience this night-shrouded new chapter of World of Warcraft alongside your friends Stalk Your Prey as a Demon Hunter: Turn the tainted power of the Legion against them as an all-new hero class-the vengeful Demon Hunter Wield Legendary Artifacts: Build a battle-forged bond with your own Artifact-a legendary class-specific weapon that transforms and grows in power as you battle the Legion Explore the Ancient Roots of Azeroth: Seek your world's salvation among the forbidden ruins of the Broken Isles