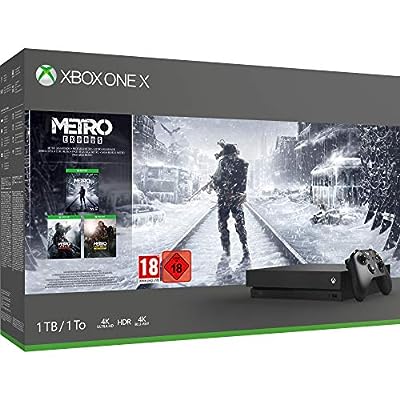 Price: £250.00
As of 2021-02-06 20:53:54 UTC (more info)
Product prices and availability are accurate as of 2021-02-06 20:53:54 UTC and are subject to change. Any price and availability information displayed on https://www.amazon.co.uk/ at the time of purchase will apply to the purchase of this product.
Availability: Not Available - stock arriving soon
Buy Now from Amazon
Product Information (more info)
CERTAIN CONTENT THAT APPEARS ON THIS SITE COMES FROM AMAZON SERVICES LLC. THIS CONTENT IS PROVIDED 'AS IS' AND IS SUBJECT TO CHANGE OR REMOVAL AT ANY TIME.

1TB Xbox One X console, wireless controller, full-game downloads of Metro 2033 Redux, Metro: Last Light Redux, and Metro Exodus, a 1-month Xbox Game Pass trial and 14-day Xbox Live Gold trial Shoot, sneak, and survive through an immersive post-apocalyptic saga Includes all three Metro games. In the all-new Metro Exodus, flee the shattered ruins of dead Moscow, embark on an epic, continent-spanning journey in post-apocalyptic Russia Enjoy instant access to over 100 games out of the box with the included 1-month trial of Xbox Game Pass Join the greatest community of gamers on the fastest, most reliable gaming network Watch 4K Blu-ray movies, stream 4K video on Netflix, Amazon, and YouTube, among others and listen to music with Spotify